Why I would fail as a wildlife photographer

Sometime last year, my mother noticed a guy positioned outside out house with a massive telephoto lens and naturally, went to ask him what exactly he was doing. Turns out he was a wildlife photographer and that he was actually filming birds (DAMMIT. Just when I was entertaining some delusions of granduer) He then showed my mom some pictures and earned himself a new fan of his work. She then PROMPTLY called me over “THIS IS MY DAUGHTER KIRIN SHE IS A PHOTOGRAPHER TOO”  – (I’m not).  He then told us that he was due to leave for a shoot in Ranthambore national park where he would capture the Tigers in the natural habitat.

(please note. This tiger is NOT in it’s natural habitat. If it were the camera person would be DEAD.)

He very kindly offered to show me some spots where I would get some great pictures of birds in the colony and that was that. It did get me thinking though, would I ever cut it as a wildlife photographer? Probably NOT. Here’s how I came to that conclusion –
I suck at camping.

The one time I attempted to camp was when I volunteering for a music festival in a place called Naukutchiatal. My  intestines freak out every time we’re in a new place “what is this place??? It is not familiar. We refuse to work”. Now, couple that with the fact that they’re shy as well “BUT IF WE CAN HEAR THEM TALK, THEY CAN HEAR US POOP” and it’s no surprise that I freaked out when I saw the tarpaulin hut with the make shift wooden toilet full of splinters (which basically covered a hole in the ground).

I swallowed my fear and pretty much gave myself a pep talk about how I had volunteered in an effort to be more open to new experiences and meet new people. . I did attempt to use it ONCE and was in constant fear of –

1. Slowly roasting to death (tarp is very good at trapping the heat especially when the sun is beating down relentlessly and there is a lack of ventilation)

I abandoned ship when someone DID almost destroy the toilet cubi-tent WHILE I WAS STILL IN IT.  I figured out an alternative by proceeding to wake up way early in the morning and trek down to the hotel on site and get me some quiet morning bathroom time when everyone was still passed out from the previous nights’ shenanigans.

My defence mechanism involves me pretending to be a statue

My exposure to animals has been pretty restricted. I love dogs, am tolerant of cats (but they hate me), I don’t mind birds unless they fly directly at me and I dislike all insects which can fly and have a stinger attached to their backsides. Bees, wasps and flying ants and cockroaches are my worst nightmares.

My only close interaction with a “wild animal” was when I was about 14, before my pre boards. I had escaped to the terrace to get a breath of fresh air and was pretty much freaking out about which exam I would suck more in Maths or Hindi when a monkey popped his head over the parapet, caught site of me and started walking towards me.

In the dark recesses of my mind, the only scrap of information I had regarding wild animals was to play dead (clearly, this was in respect to bears but in the 2 seconds the monkey took to get to me, I went with it.) Everything was perfectly fine… UNTIL IT STARTED TO CLIMB ME. (kind of like this but imagine the squirrel being 10 times bigger and me not making conversation with it)

Just when its mouth reached my shoulder, I freaked and shook my arm. He jumped off, snarled at me and then AMBLED into the house, checked out the computer room/study and while he did that I ran into the house to warn my mom and alert my dog :’D

CAN YOU IMAGINE WHAT WOULD HAVE HAPPENED IF THAT MONKEY WAS A BEAR? DEATH. PAINFUL AND CERTAIN DEATH.

I recently visited the Andaman Islands and part of our time in the Andamans was spent on Havelock island – home to recipient of best beach in Asia (in 2004) – Radhanagar Beach. 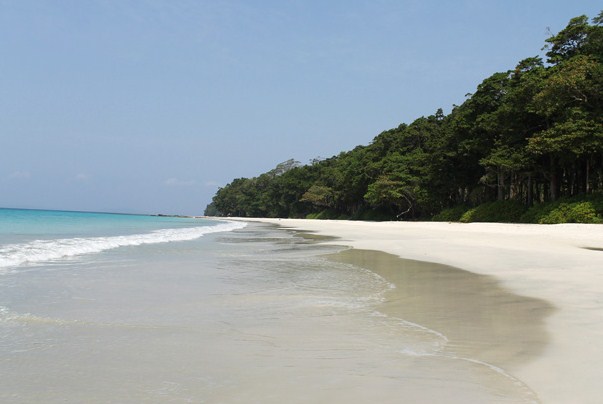 This beautiful stretch of beach is about 2 kilometers of powdery white sand and clear blue water, with 100+ ft. Trees lining the shore, until it becomes a bit rocky. I quite enjoyed my walk alone on the beach… noticing some pretty peculiar tracks on the sand leading from the water to the bushes lining the shore and back…They kind of looked like cycle tracks.

I didn’t really give them much thought until I spotted one of the “BEWARE: Salt water crocodiles sighting today” signs. I had just about reached the rocky bit of the beach (which would provide excellent camouflage for the land lizards) and I immediately had visions of a crocodile chasing me.

Fortunately, or Unfortunately, I will just have to settle for being a jewelry designer and a connoisseur of animal themed gifs and videos which reduce me into a fit of giggles.