HELLO? TESTING? IS THIS THING ON? I saw Leo had this contraption on a while back and thought I would see what the big deal is… I heard him telling some boring story about how he went “exploring” YAWN.  You want a story, here is the story of my LIFE. I was born in the STREETS. Don’t get any real-er than that!  Let’s start. 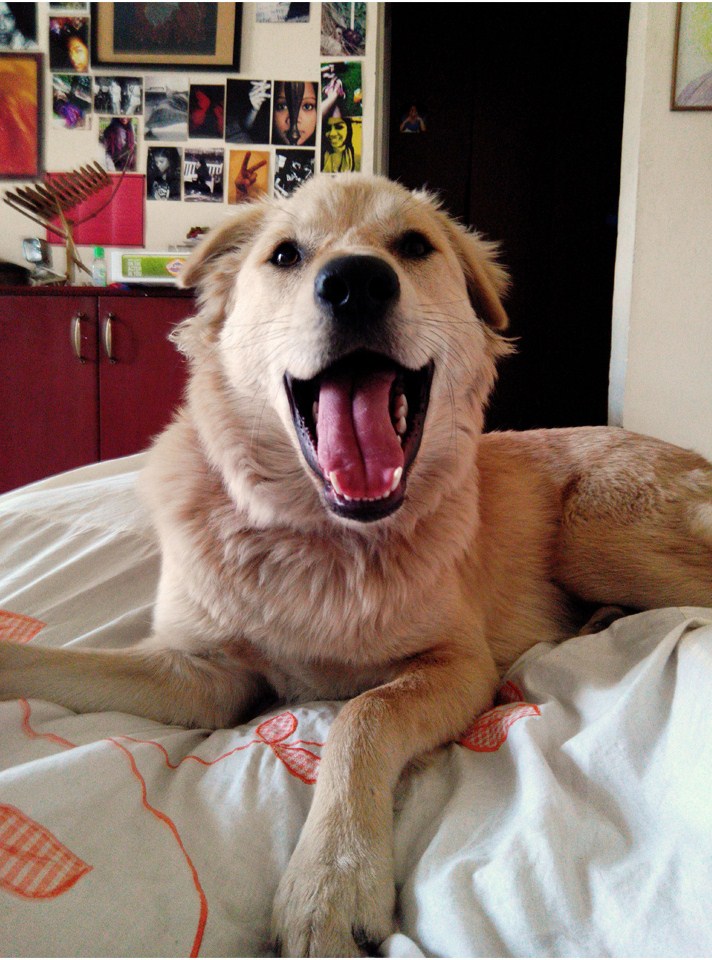 My name is Ozzy!! I’m 7 months old! Maybe 8! I don’t know because I was found by my humans when I was little and they don’t know when I was bornded.

My mom found me roaming the streets, I was shouting down this big noisy animal wither round turny things for feet but for some reason she though i needed to be rescued. I didn’t know what the hell was happening so I just sat quietly while she took me to my future home.

There was a lot of cooing and cuddling and there was this other big dog who kept trying to nibble me, that big dog is now my best friend in the whole world!! He pretends he doesn’t like me, but I know he loves me and just doesn’t want me to know! Know how I know? WELL, when I get hurt, he comes running to check on me – he tells me he’s checking to see if I died so that he can live in peace, but I know it’s because he is worried about me!  He also lets me eat all his food. He is a weird dog, I never met a dog who didn’t like food! He doesn’t eat until I am eating with him.. even though he knows I will finish up his food if given half a chance. DOES THIS MEAN I’M THE BOSS? I could be the boss if I didn’t piss myself everytime Leo puts me in my place!

The peeing thing. I’m still trying to get a hang of it, but sometimes, I can’t HELP how happy/ excited I feel! I guess the happiness and excitement just leaks out because it FEELS like I am so happy I could BURST!!! It also happens when I am scared… or relieved… this one time it happened because I went through a ROLLERCOASTER OF EMOTIONS. I thought someone was breaking into the house late at night, when I realised it was Kirin I peed all over her in happiness and relief. She wasn’t super psyched about it… even after I told her it was me showing her how much I love her!

I was afraid of quite a few things really, living on the streets does that to you…! I was even scared of the ukulele .. but one day one nice man played it for me as I fell asleep!

By the end of that session, I was even trying my hand at playing the damn thing! He was a nice man. I peed on him.

I like people, but I believe that socks are evil things… they’re the root of all that is evil and must be destroyed as soon as possible.  I like to think of myself as Ozzy the sock slayer check out what plays in my head while I slay the socks!!!

My favourite fruit is the ber. I don’t really care what it tastes like, as long as i can pretend it’s alive and play with it.

When I’m not playing I do very important things… like guard the house from intruders.

Hey. The fly is an intruder! Leo doesn’t like them either! And I’m learning from the master!!! Okay okay… so I got a bit bored… BUT dude, STRETCHING IS IMPORTANT TOO.

I keep my teeth nice and sharp by chewing on anything and everything. Nobody is a fan of this.. though I can’t for the life of me imagine WHY. Don’t these fools KNOW they need to be at their SHARPEST when intruders arrive?!?!?!

Speaking of chewing… This gizmo looks like it tastes pretty tasty… maybe if I could just get a quick nip while Kirin’s not watc…..