Sometime last year, Leo got locked out of the house. This happens sometimes and he doesn’t really mind… and pretty much waits near the front door (not making a sound) till we realize he is missing. This time though, one of the main gates to the house was left open. So he decided to go out and explore the colony all by himself. 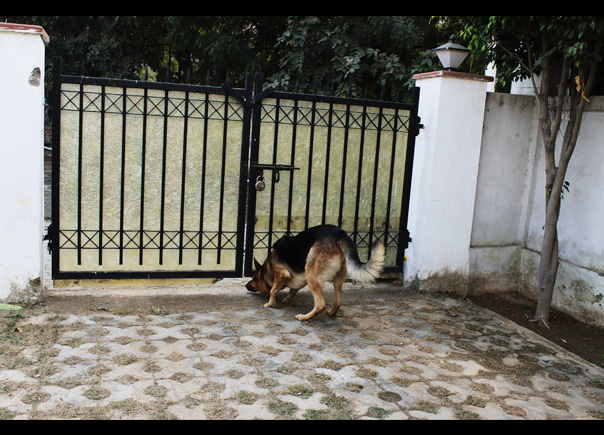 Leo at the security breach

It was the height of summer and each family member thought he was in another family members’ room and at about 11pm, the horrible truth was unearthed. HE. WAS. MISSING. AND. THE. GATE. WAS. OPEN.

We got the car out and drove through the gated colony hoping he would show up sooner rather than later… We were told by the guards from the main gate that they did indeed see a big black dog strutting his stuff somewhere close to the main gate, but he hadn’t exited the colony from those gates. We were also told he was NOT ALONE. He was with (what dad suspected) his boy friend – the garbage man’s dog. The guards then pointed us in the direction they last saw him head and we went the same route.

We were now at the back gate, which led out into another colony… one with many winding roads… and many stray dogs. Unfortunately, the guards at THIS gate told us that they saw a big dog matching Leo’s description walk out of the gate. He also mentioned that a pack of ten dogs saw him and were ready to attack, but Leo stood his ground and pretty much stared them down… right before he hooked off to explore this never before explored land.

We drove up and down the many roads of that colony yelling out his name… but we found nothing. After about two hours of searching,  my dad said we might as well go home. He told the guard to leave the gate open and to call him on his cell phone if he were to spot Leo again. All of us returned home with heavy hearts and went into our rooms to have a little cry…

I got the old dog thought translator out and attached it to his head and asked him to tell us HIS version of the story… I might have to ask him questions to jog his memory… and give him treats for answering those questions… 😀
Here we go!

WHAT. WHY. WHAT IS THING ON MY HEAD?!

Kirin: Ok Leo, tell us about the time you ran away from home and I’ll give you some egg.

Kirin: Leo be good. Or I will give the egg to your little brother O…

Leo: IT WAS A DARK AND STORMY NIGHT!!! Ok. Not stormy. Quite hot.  But still dark .I came out to greet you and Piya and noticed that you were both carrying things in your hands and neither could lock the gate. So I wait. I wait till everyone goes in and closes door and I thought I’d go exploring without having to lead a silly human around. Caring for you lot is really exhausting sometimes!

Leo: OHMYGOSHOHMYGOSHILOVEEEEEEEEGGGG!!!! WHY no give whole egg?

Kirin: COZ YOU NO GIVE FULL STORY!

Leo: I give full story you give FULL EGG???

Leo:  Well, at FIRST I thought I should do what I usually do… which is wait patiently outside the door without making any noise and watch everyone panic until they realize I’m outside, BUT THEN THE GATE WAS LEFT OPEN. And WHO would show up at that precise moment? GARBAGIO! The white dog who’s always with that garbage dude!

Kirin: How do you pronounce that?

Leo: I think he’s got a bit of Italian mix “Gaar – like a pirate’s ARR, Ba as in BAA BAA black sheep are you very full?”

Kirin: Those aren’t the words.

Leo: No? Isn’t he talking about how many bags of dried dog food the sheep ate?

Leo: WELL HE CAN’T BE VERY FULL NOW CAN HE? SPEAKING OF HUNGRY….

Kirin: oh alright. here’s a little bit. On with the story!

Leo: Well, so this Garbagio, he always laughs at me for having such co dependant humans that need to be led while he’s trained his human so well that he doesn’t need to TIE them to him. OBVIOUSLY I wanted to show  him that my humans were more than capable of being left alone and I went out for a little jaunt around the colony. OH IT WAS GLORIOUS. We first went to the main gate and Garbagio said that place was lame (I didn’t want to look like I DIDNT know what was lame and not lame so I coolly agreed with him and we made our way to the back gate… where he said some really hot babes hang. I told him to RESPECT the female of our species and to call them bitches! Some dogs.

Can I get some toast with that egg you promised? THERE IS SOMETHING ABOUT THE CRUNCHINESS OF THE TOAST THAT REALLY MAKES ME HAPPY. (don’t SKIMP on the BUTTER)

Kirin: Anything else your highness?

Kirin: NO. Where’s ozzy, I’m sure he will be happy to…

LEO: SO THEN WE’RE at the back gate and to act cool and not arouse any suspicion, we walk outside pretending we belong to a couple of people who were exiting the colony by foot. We barely went ahead a few paces when all of a sudden this gang of dogs starts barking at us!!! I turn around and that lil casanova Garbagio had faded into the night – which if you ask me is quite a miracle since he PRACTICALLY GLOWS IN THE DARK. Anyway, I stood my ground because all these yappy fools where just trying to show off in front of their bitchfriends and I could see they were fighting a losing battle since those lot were all making swoony eyes at me…They were getting a bit noisy and I had pee to sprinkle on new unfamiliar territory so after staring them doing for a bit, I walked off into what looks to be a promising by-lane.

YOU WANNA HEAR MY WEE-ING SONG?

“SPRINKLE SPRINKLE LITTLE WEE! NOW THIS THING BELONGS TO ME.”

Leo: thanks. I made it myself.

After this whole thing I was quite tired and was missing the cool breeze in my pet human’s room…So I thought I would head back home. Once I got to the gate though, the guard at the gate started calling me by my NAME, (CREEPY MUCH?) Now I don’t know what kind of dog he thinks I am… but I don’t just go to ANYONE who calls my name! ESPECIALLY strangers. I went back down Leo’s Gulli (I peed ALL over the place) and I found a puddle which seemed like a good place to plonk myself for a little break coz I was beginning to feel a bit thirsty as well! I must have dosed off for a bit because I was awoken by the youngest human’s voice going LEOOOOO!!! LEOOOO!!! And the all too familiar rumble of the METAL ELEPHANT! I got up from my resting place and sure enough THERE they were! Poor things must have really missed me because even when I  dirtied the car with my slushy muddy paws but no one really cared. They were all hugging me and fussing over me. Once we were back they bathed me (thank GOD. I’m all for the soothing effects of a mud pack, but this one left me feeling a bit gross) and we all went to bed.

So there you have it, the silly fool has gone off to devour his meal.

You must’ve guessed from his version that the guard unsuccessfully tried to coax Leo back into the colony… but failed and then called my dad, after which we found Leo muddied but otherwise completely fine.We seem to think he didn’t like the street life so much (he must have drunk that puddle water because he had the shits for about 3 days and doesn’t seem to care as much as before about Garbagio hanging outside the gate.)

(Leo being the ferocious guard dog that he is. protecting the house from BEES.)

ALL’S WELL THAT ENDS WELL. Those 4 hours we lost him were horrific. 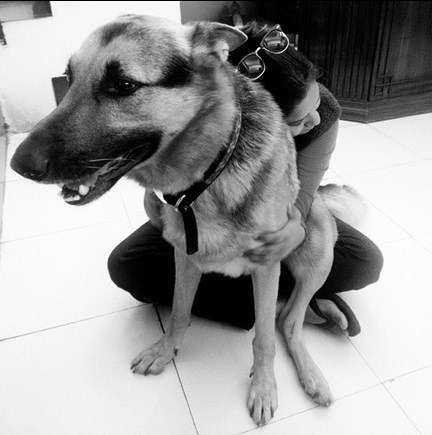