Journey to the Edge of The Earth

Journey to the Edge of the world

When it comes to traveling, I make sure to start my journey with ZERO expectations or preconceived notions. Earlier this year, I joined a couple of friends on a road trip to the Rann of Kucchh. I had heard a lot of it’s beauty and the fact that the sand turned absolutely WHITE under the full moon and was looking forward to seeing that in person. I’ve gone on cross country road trips before – The longest one being delhi – kochi – back to delhi (though i had to bail in hyderabad and fly back because my mom told me she would throw me out of the house if I missed christmas) … The trip itself, was all kinds of awesome and I cannot believe I have not written a blog about it yet (God I’ve become lazy the older I’ve gotten)

My method of traveling is fairly haphazard. The only planned things are my date of departure, accommodation and any connecting flights that need to be booked before hand. Everything else, I’m usually happy to go along with whatever plan – which in my HEAD makes me a great travel companion (others might disagree). I’m pretty much down to do any exploration/ travel/ adventure – as long as it doesn’t involve me going to local clubs and dancing to rave music.

I’ve been EXTREMELY lucky to be friends with A type personalities/ PLANNER TYPES who have a particular agenda on holidays AND who are on the same wavelength/have similar interests as I do! This year’s road trip to Kuchh was masterminded by my very very dear friend, @guneetnarula and for company, we also had along with us super fun and all round awesome @moumitadas.

Guneet’s original plan was way more intense – he was going to hit up all the archeologically historical places in india after meeting up with his partner who was on an archeological digging site! You can read more about it on his twitter handle under the hashtag #thehistorytour .. he tweeted HIS entire journey . Moumita and I just tagged along for the first leg of the journey, in which we were to visit Dhola Vira and Lothal.

The funny thing about planning trips are that some of the most memorable things from the trip were totally unplanned.

The first sight we caught of the Rann of Kuchh is this road we had to drive on on our way to the Island where Dhola Vira was located. On the map, it’s blue on both sides of the road, but when we were physically there, it was just DESERT on either side of us. It was surreal. 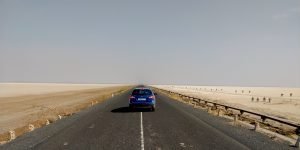 Once we got to the place, we had anticipated taking around 3 hours to visit and take in the the whole site of Dhola Vira, but we were pretty much DONE in 45 minutes.. Seeing as to how we had a lot of time on our hands, Guneet decided to take the road leading away from the village (where we had come from) just to see where it went. It was an unmarked road, tarred but not on the map, and it ended up taking us to a breath taking view.. 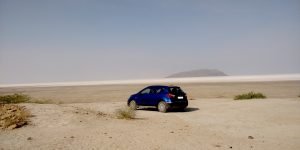 When we got to the end of the road, all we saw was a border security force camp, a temple, a herd of cows and two dogs, and stretching beyond it, as far as the eye could see, the pristine the Rann of Kucch in all it’s glory. Apart from two guards at the BSF camp, and the three of us, there was not a single human in sight. 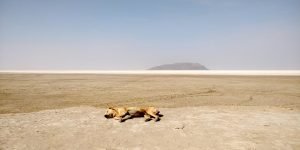 When we looked at the map to see where we were once we got access to the internet, we were at the very edge of the Rann of Kucch, and on the other side was Pakistan ( not that you could see it – but it was kind of insane just knowing that.) 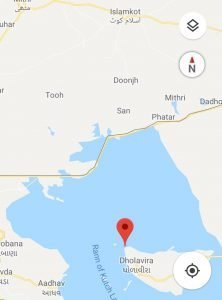 The next day, when we went to visit the ACTUAL Rann of Kuchh as advertised by the government with a viewing station etc etc, it came NOTHING close to the experience we had the previous day –  just us three at the edge of the world. It was pretty much a disappointment.

Luckily for us, Guneet had heard of a vantage point in the Black hills (Kalo Dungar) from which you could see the whole dessert reflect white when the moon rose – it was also a pretty killer place to check out the sunset from. When we got there, it was pretty much more of the same in terms of tonnes of tourists, locals earning a livelihood by selling souvenirs and performing for the crowd, but once the sun set, everyone beat a hasty retreat. Within 10 minutes, only the three of us were left while we waited for the moon to rise, against the background score of people trying to make their last sale of the day and tourists making their way to their respective tour buses and taxis.. After a few more minutes, there was complete silence.

We sat around for a bit in the silence, each one of us lost in our own thoughts… After a while, I started playing some music on my phone. We waited around for a little while, and in the end, the moon rose, but there wasn’t any brilliant reflections for us to see on account of there being little to no rain that monsoon or the year before…  but what we did come away with was a moment frozen in time, taking in the beauty of the Rann of Kuchh, underneath the moonlight, dancing the “The Generational’s” “you got me”.