Hindi Means “NO” in Tagalog

I made some friends from the Philippines and one of the things that instantly made me feel like I FOUND MY PEOPLE was the fact that “Hindi” in their language means “NO”. I cannot find a better word to describe how I felt towards the language for a major chunk of my life.

Hindi has never come naturally to me. Growing up, we always spoke in English. This is because while my father can speak 7 languages from Konkani to kannada to even Latin the one language he does not know is the one my mom grew up with living in Chennai – Tamil. My mother on the other hand, first came in contact with the language when she went for training as an IAS officer to Mussourie. She tells us her Hindi teacher at the time smacked his head when he found out she was allotted the Uttar Pradesh Cadre.

I have had tuitions for Hindi ever since I was in class 4. It began with me failing at Hindi resulting in my father coming to school and pretty much copying an entire semester’s work of Hindi lessons from the notebook of one of the toppers of the class while sitting outside my classroom on one of them tiny tables +chairs…. My father was horrified because he couldn’t understand how I could be the fruit of his loins since he got the first rank or something in the state for Hindi and I pretty much sucked ass ( must’ve gotten that from mama :P)

The whole tuition teacher scene failed when they found out I was tricking the teacher into not showing up for class after school by telling him I had stay back for basketball… and when he actually showed up for class, I had a knack of getting said tuition teacher to tell me about himself and his childhood and distract him from actually doing any teaching (when my parents found out, they figured we wouldn’t be requiring his services… I guess they weren’t too impressed with the fact that he was successfully conned by an 8 year old.)

I don’t really know how but I managed to scrape by year after year… Tuition never really helped because it was just another person trying to teach me a language in the VERY SAME LANGUAGE I was struggling in… see my dilemma? 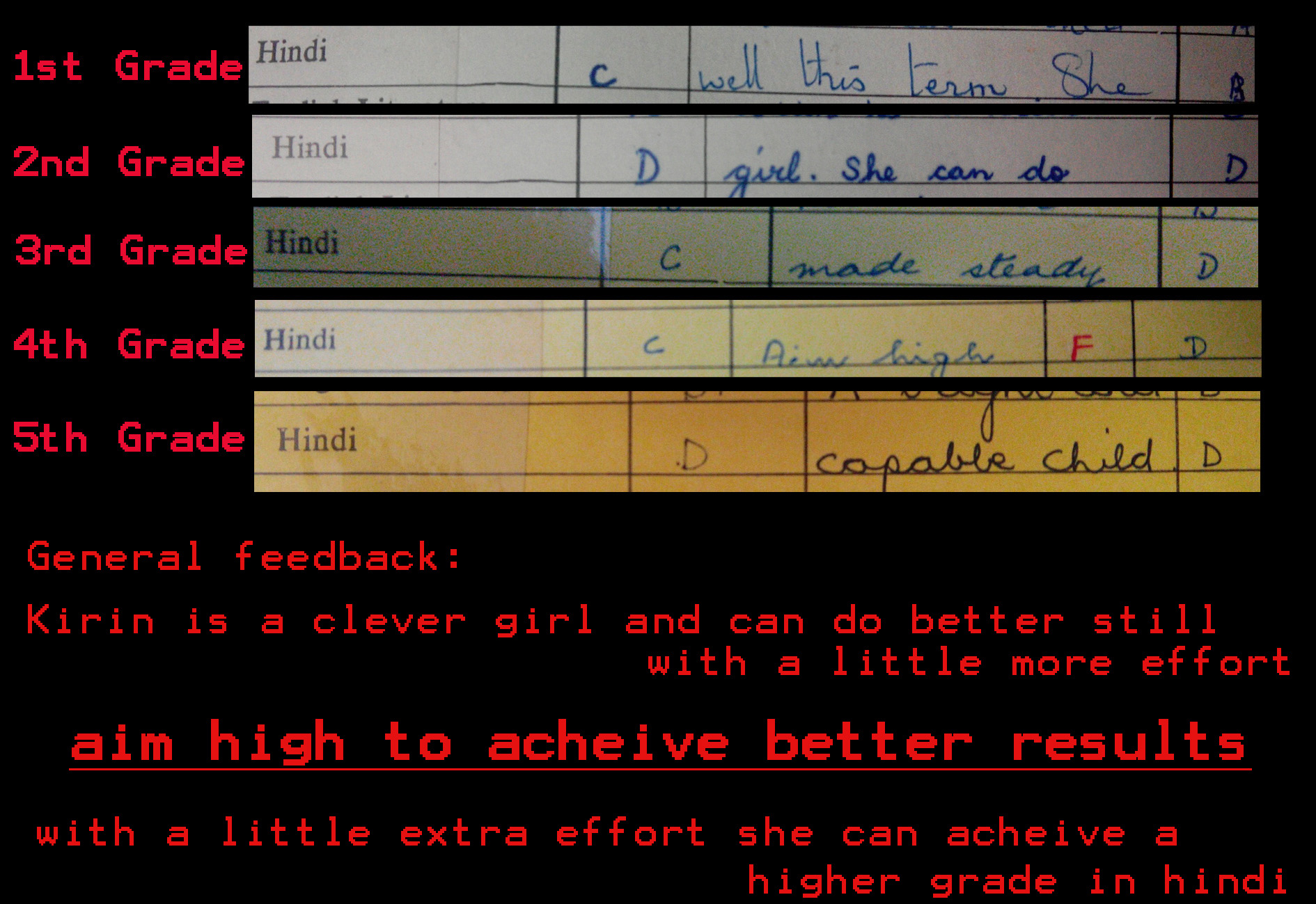 There I was coasting along with by D’s and C’s when BOOM. Middle school came and SLAPPED ME ON MY FACE. Not ONLY did I have to deal with Hindi being divided into Literature and Language (WHYYYY?!?!?)  they threw in a whole OTHER frikking language into the mix. “AN ANCIENT ONE ???? ARE YOU KIDDING ME?”

No prizes for guessing how I fared at Sanskrit. I could barely get my shit together in HINDI and now I had to translate Sanskrit INTO Hindi? Whatever I managed to get right in translation I GOT WRONG because I inevitably used to get the gender or the tense completely wrong once I was done translating it into Hindi. 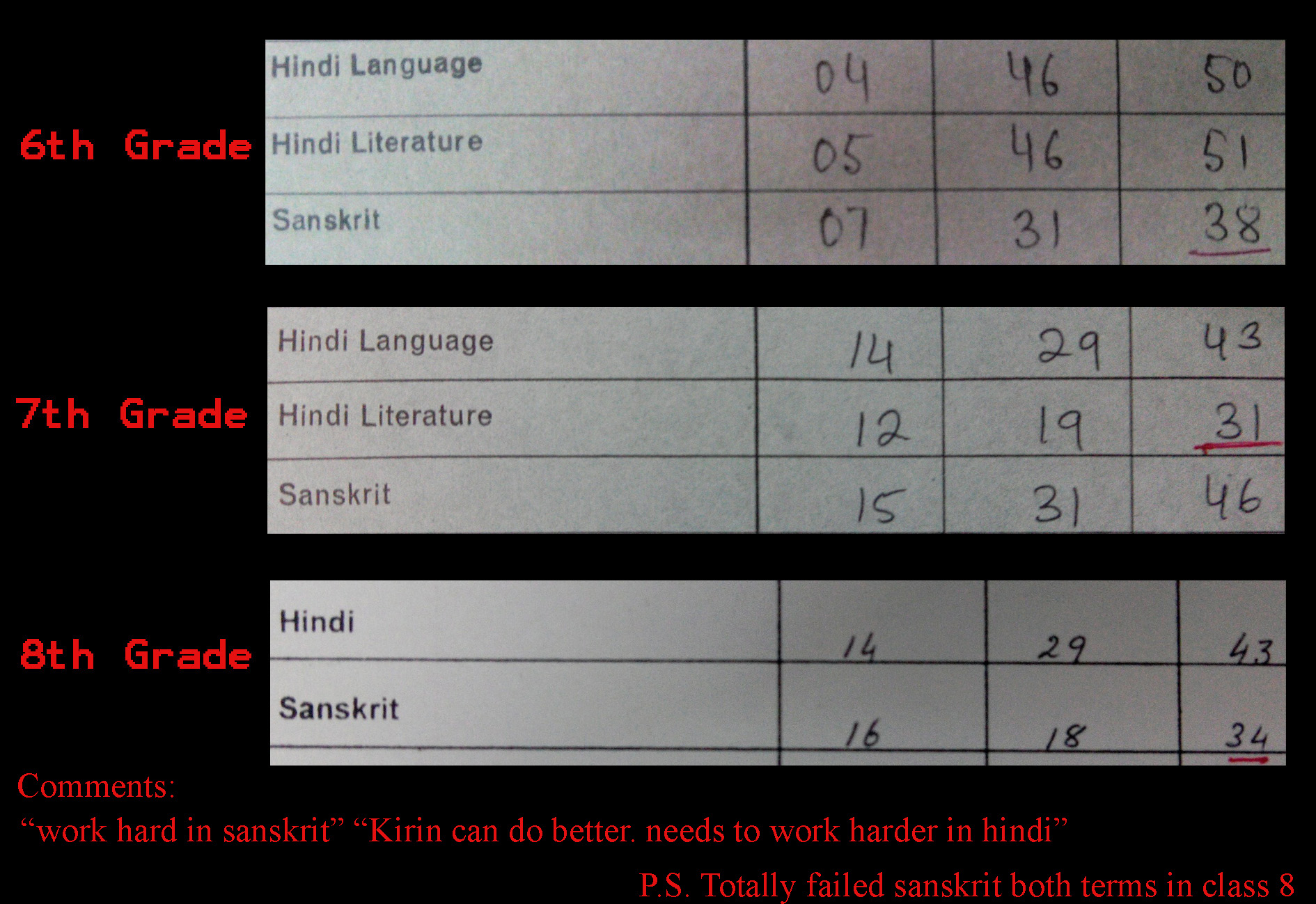 Cut to class 9 – YAY! I get to drop Sanskrit! My maths tuition teacher (I had tuition for EVERYTHING except English and social studies. I was very lazy at everything I wasn’t actually interested in) recommended I try out this person who had recently moved into our colony. After having my fair share of tuition teachers who thought they could help me, I was wary of how good she would actually be.

GUYS. SHE WAS LIKE THE FAIRY GOD MOTHER OF ALL HINDI TUITION TEACHERS.

I remember the first day I went over to her house. She gauged that I reached class 9 without even knowing the hindi alphabet.. (HELLO IS ANYONE SEEING THE FLAWS OF THE EDUCATION SYSTEM HERE?) She didn’t make me feel like a total dumbass, instead she treated me as a person who could understand a language when spoken but had no clue about the written form.

ALSO. SHE TAUGHT ME USING ENGLISH. We started made painstakingly slow progress. This progress was noted by my Hindi Teacher in school, who happily mentioned it in passing to my mother at a PTA meeting (one in which I was hoping one less teacher would go on about how much potential I had… I “only needed to work a bit harder”…) WHO committed the cardinal SIN of opening her trap and saying to my school Hindi teacher “Oh yeah, she goes for Hindi tuition. We’re really seeing the improvement in her since then”. OF COURSE I DIE A THOUSAND DEATHS because within 5 seconds of my mother uttering those words I have gone from “student who makes an effort” to “OH so my teaching is not GOOD enough for you is it?”

From that moment on, she starts to subtly pick on me. Not done homework? *snarky question about whether I didn’t get time to do the homework at tuition* Query about something *I’m sure your tuition teacher will explain to you better* whatever. I was like I just have another year to deal with this rubbish until NO MORE HINDI FOR LIFE.

I pretty much ignored it till the Half-yearly exams in Class 10. By now, I had been with my amazing tuition teacher for a year now, and had a better grasp over the language. Unlike 90% of the class, I actually used to formulate the letters and essays on the spot instead of mugging up a sample essay BECAUSE I COULD. In my paper, I had decided to go with the essay option “My Favourite Book”. I was actually pretty pleased with my effort as I wrote about my favourite book, “The Little Princess” by Frances Hodgson Burnett. Taking great pains to explain the plot line and the reasons why it’s my favourite book ALL IN HINDI. (CAN YOU EVEN TRY AND SPELL THE AUTHOR’S NAME OUT IN HINDI?)

We got our papers back, I turned the pages eagerly to see how much I scored and I was shocked to see I got a big fat ZERO. OUT OF 10. Even as a as a 14 year old kid, it really didn’t add up to me. “An
essay is supposed to test out your composition skills and grammar and spelling. Why on earth have I gotten a ZERO. I should have AT LEAST gotten a 3.” So I head to the teachers table to grovel for some more marks so that my final score can hit a 50 – the highest I have ever scored in my life in Hindi. This is the conversation that took place:

Teacher: Yes Kirin, is there an error in calculation?
K: No ma’am… but I wanted to ask why you’ve given me a zero in the essay. I’ve written a whole essay.
Teach: Oh yes, you got a Zero because you wrote about an English book.
K: but… That’s my favourite book… and the question asked me to write about my favourite book.
Teach: You should write about the Mahabharata or the Ramayana
K: But I’ve never even read the Mahabharata OR the Ramayana!!! How can I write about something I’ve never read? It is not my favourite book.
Teach: There are so many sample essays available.  Up Just mug up one of those.
K: …………………..
Teach: NEEEEEXT!!!

I was LIVID. Not only have my efforts to write an original WORK OF LITERATURE been ignored, I’ve been told to shut my imagination OFF and just mug up a stupid essay from a stupid GUIDE BOOK and vomit it out on paper when the option presents itself.

Never one to stay quiet about INJUSTICE, I came home and ranted about what happened in school.. My mom was MAD. She’s always been a nurturer of imagination and before becoming an IAS officer, she used to be a teacher herself. So the next day, she went to the principal’s office bringing her up to speed with what was being “taught” in the classrooms. Later that day, the Hindi teacher came by to tell me that she had awarded me 7/10 for my essay going “GOSH. You didn’t have to go to the PRINCIPAL about this.” The whole exchange left me wondering whether she gave me those marks coz I deserved them or whether she was just trying to save her ass… This feeling lingered right till the end of the year, to the Pre boards… When we got our papers back, I was delighted to see I had scored 70. A couple of kids joked about how based on that, everyone would be getting excellent marks (My shitty Hindi was legendary).

Once everyone got their papers back, she felt the need to make the following announcement while looking me in the eye “Some of you, I’ve marked leniently because I do not want you to feel discouraged…” and my rage just muted everything else which left her mouth after. I brought home the offending paper, handed it to my tuition fairy god teacher and asked her to mark it again and be brutal. 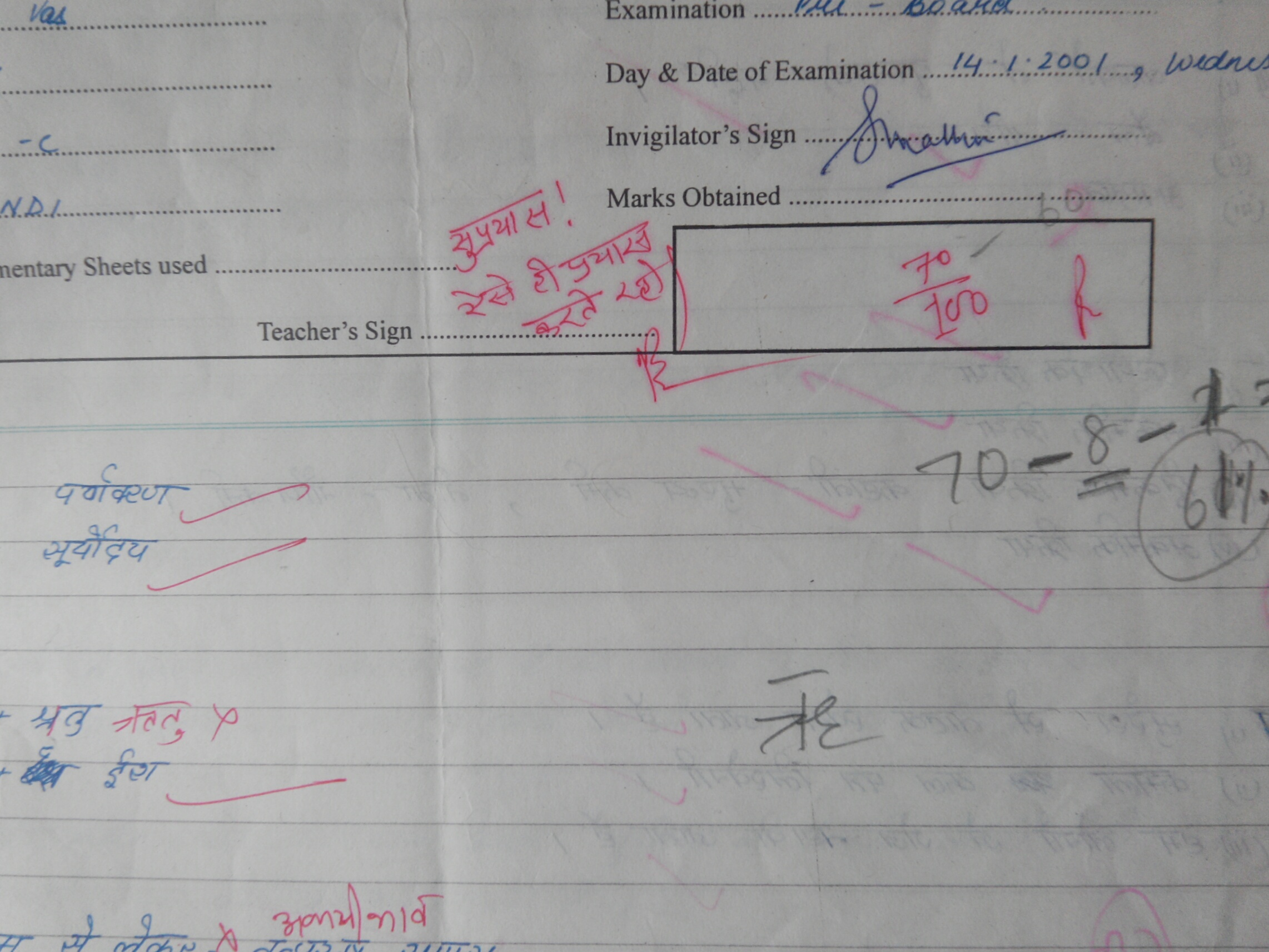 There was a difference of 9 marks.

I guess ultimately, that smug look on the teacher’s face coupled with the comment about marking me leniently provided me with the fuel I needed to work my butt off before the boards and with the help of my fairy god tuition teacher, whose house I was at from morning till night (Literally. I used to eat the yummiest of lunches at her house) in the run up to the boards. Ultimately this helped me get 82/100. NO mugged up essays and letters from shitty guide books and NO lenient marking.

It’s probably the greatest lesson I’ve ever learnt with respect to working hard. The feeling you get when you’re rewarded for the thing you’ve been working so hard for is one worth the slow painful journey till the end.

I was ecstatic with the result and thought it was a great way to END my tumultuous relationship with the language… but NO. It came back to torture me in college. As a “Qualifying Language Course”. Totally failed in the first year because I was a lazy cow and I didn’t study… and then totally nailed it in the second year because I was the opposite of a lazy cow and I studied – this if at first you don’t succeed try, try again seems to be my life’s motto. 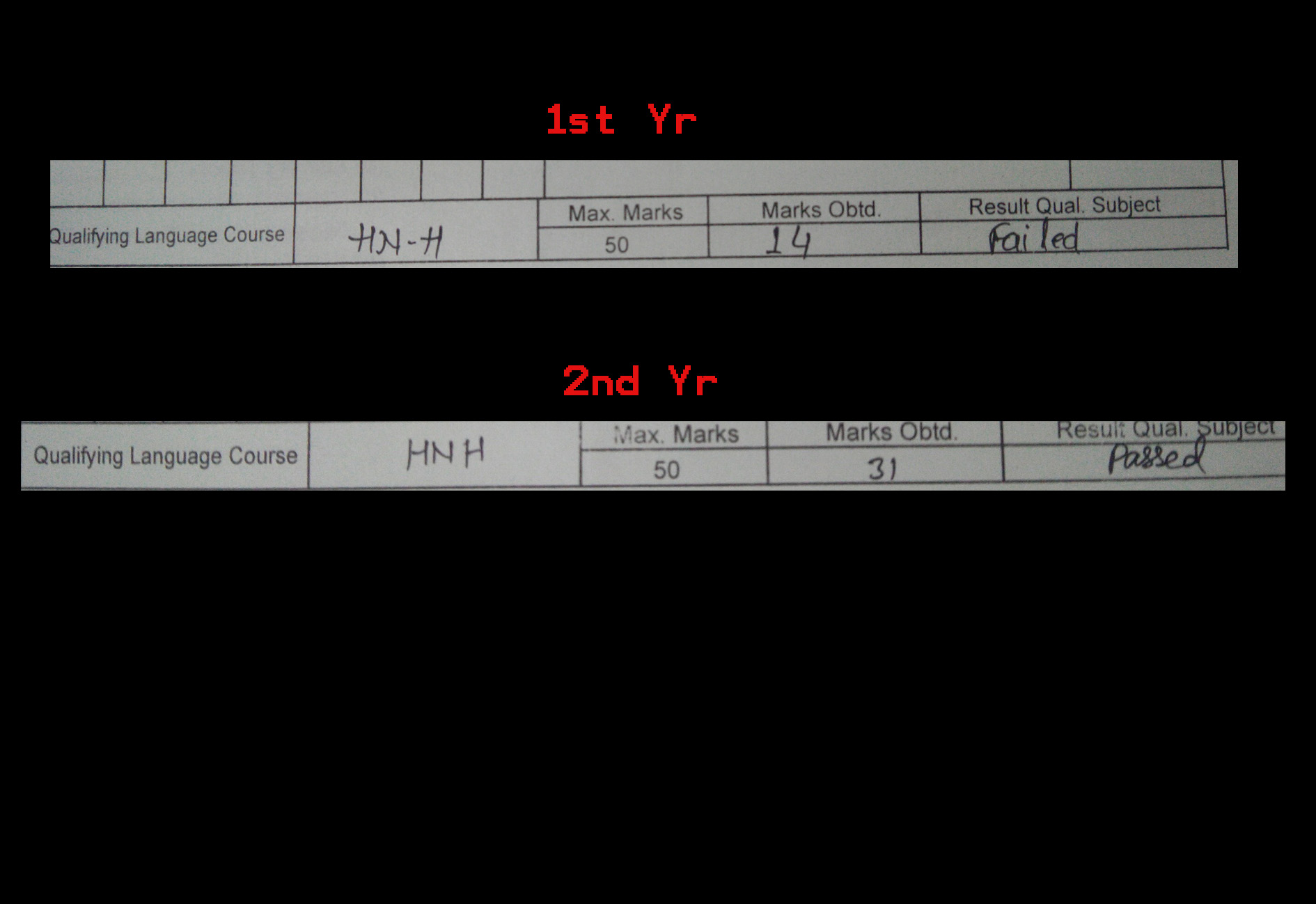