JESUS HAS RISEN AND SO IS THE BREAD I AM GOING TO EAT!!!!

So every easter, I decided to give up the one thing that is most important to me – Potato and everything involving it. This year, FOR I DON’T KNOW WHAT REASON – I decided that giving up potato was TOO EASY. that if I really wanted a challenge, I should give up CARBS – Maybe it was curiosity – about how bad it could be/ whether *I* a person who’s diet is pretty much 90% carb and whose work involves handling (mostly) carb in all it’s shapes and forms from morning to night, would be able to handle giving it up for a period of time. How long would I LAST? 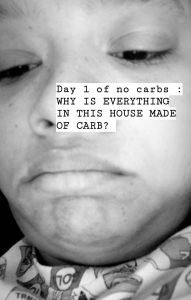 Well, I don’t want to jinx it, but ladies and gentlemen I’m 35 days down and I have 10 more days to go. The first week was terrible – where i was hideously angry/grumpy/upset all the time and I had a headache at the end of each day. It didn’t help that I was on assignment, literally elbow DEEP in savory snacks smelling/ looking at it from about 11 in the morning to 7/8 in the evening everyday.

After the 7th day, I stopped getting a headache at the end of the day. My energy levels were surprisingly high for someone who was off carbs.

What helped me was the fact that I decided to record my carb free journey on social media, my reasoning behind this was, that if more people were invested in my journey, and knew what I was doing, it would be more difficult for me to bail. I would be held ACCOUNTABLE for my actions (or inaction) – I TOTALLY understood why celebrities are in such great shape most of the time – ONE because their jobs sometimes demand it, and secondly there’s like a million eyeballs on you waiting to see if you slip up.

My community online was SUPER DUPER supportive and encouraging. There were times i slipped up (twice so far – once when I was returning from Bombay after completing a slightly stressful assignment and I hadn’t eaten any breakfast, and the only things available in the airport were just CARB BASED snacks… and I ultimately ended up buying a bag of spicy banana chips and eating them and another time, the SAME BANANA CHIPS were consumed in a pms frenzy (I didn’t at the time know I was PMS-ing)

My take aways from the whole experiment?

It’s possible if you put your mind to it, you’re the one who has to make that decision to begin with and then also stick with it.

dal and pulses are 19% protein …. and LARGELY CARB (this one had me SHOOK – primarily because I’m not a fan of dal, but I had a bowl of it thinking it was protein, until some friendly folks in instagram EDUCATED ME)

Carry snacks and prep meals. This is pretty much the only way anyone will survive giving up carbs since basically every snack/quick fix meal available when you’re out and about involves
carbs.

If you’/re going to be giving up carbs, and you’re generally not a person who has a sweet tooth, you will suddenly develop a SWEET MOUTH and you’ll find yourself consuming weird amounts of sugar – until you cop on that it’s your body’s way of dealing with the carb deprivation and that you’re not doing your body any favors by continuing to ingest sugar while depriving self of carb.

You become a very boring conversationalist because you can’t stop thinking about carbs, and people are genuinely interested in finding out how one survives without a major food group (according to them)

I was made aware of the amount of crap I manage to consume during the course of the day primarily because I am the one handling the food. Which pretty much means, I’m SNACKING for 8 hours straight (MINIMUM)! It’s no WONDER that I gained so much weight in the last few years. Since I started avoiding carbs, I was becoming way more conscious of HOW MANY TIMES I was unconsciously popping a chip or nut or some bread bits in my mouth WHILE i was working.

I eat more protein than i used to and I’m down to about two solid meals a day. I don’t feel tired or low on energy – except for this one time I FORGOT IT WAS HOT OUTSIDE and went to OLD delhi without eating anything and proceeded to twist my ankle (because my ankles are stupendously weak) and then proceeded to feel super faint. I clocked it down to my body having not an OUNCE of sugar in it and our bodies pretty much NEEDING sugar to survive the indian SUN.

Sugar free chewing gum saves me from snacking during the day.

What I’ve really seen improving is my need for CONSTANT snacking if i need to snack, it’s mostly salami or roasted pine nuts. I also eat a TONNE of veggies now.

You know what’s weird though? Now that Easter Sunday is coming closer, I’m sort of freaking out about HOW MUCH carb i should consume on the day itself – should i just TREAT MYSELF and reward myself with whatever I want to eat on the day with no fear of me slipping back into my terrible eating habits? or will I be slightly more sensible and treat this as a sort of cleanse and template for moderation – like a switch to a healthier sort of lifestyle?You know the struggle when you’ve gone 45 days without an accident and you think of how if you start again, you’ll be starting from the very bottom of the hill from the dreaded SINGLE DIGITS and you’ll wonder whether you really want to endure a week of headache before you can get to the stage where you’re body doesn’t crave carb anymore.

I really hope this experiment leads to me deciding to take healthier choices in life… NOT lose my shit if i don’t have access to a carb filled packet of goodness … and order 14 packets of regional namkeens online JUST BECAUSE I CAN – right after i CRUSH a lays masala party pack. ONLY TIME WILL TELL.

HAPPY (F)EASTER – I DID IT. (I NOT ONLY managed to not set my hair on fire during Midnight Easter Service), BUT it’s BEEN 45 friggin days and I have been CARB and SUGAR Free for 43 of them not including my two slip ups! I AM SO PROUD OF MYSELF – I have the full intention of keeping my weeks carb free and only eating carb on a Sunday. Buuuuut that’s a journey for another blog post!!! 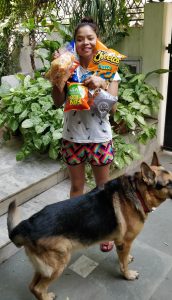