Guest Column: To Russia With Love; Otava Yo!

Think back to a moment when you laughed so hard that tears streamed down your face, formed puddles at your feet, and, in a matter of seconds, transformed into life-threatening whirlpools. Remember that moment? When you were so incapacitated with laughter that you could do nothing to save yourself?

Now merge that with the dire somberness of Indian bureaucracy.  Kamani Auditorium sprinkled with marigold decorations. Rotund bureaucrats in safari suits. An announcer with in an accent reminiscent of British aristocracy.

And I present to you the second-half of the second-day of the 3rd International Sufi Festival organized by the Indian Council for Cultural Relations. Featuring six merry Russians in parka hats and Rupa baniyans, playing Russian folk-disco-dance music. Suffice to say, nothing Sufi about it. But a stage act that nonetheless left the audience clapping with joy throughout. Otava Yo is what they call themselves, which Google wisely translates into “Aftermath E” (yes, Google occasionally fails us). 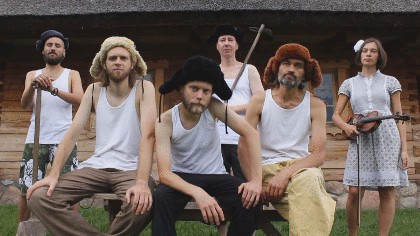 The evening begins with a lone guitarist on stage, who wears the weathered look of Captain Haddock. A slow folk rhythm emanates. A head pokes out from behind the curtain. A scruffy violinist scurries onto the stage accompanied by the bassist. Another violinist in a demure grey frock (with a delightful flower in her hair) joins them and the tempo picks up. A lanky man with a 12-stringed Russian table-like instrument plucks his way into the groove. And finally a Napoleonic drummer marches onto stage wielding his instrument – a large bass drum slung in front, a small crash cymbal perched on top with an orange wood-percussion-thing next to it.

Then, the comedy act begins. Alexey Belkin, the player of the 12-stringed Russian table-like instrument, greets the audience with a rumbling ‘nomoskarrr’. He looks at us, all seated very formally in Kamani, and apologizes for playing disco music that forces people to dance. “You have no space to dance,” he says, looking thoroughly saddened. 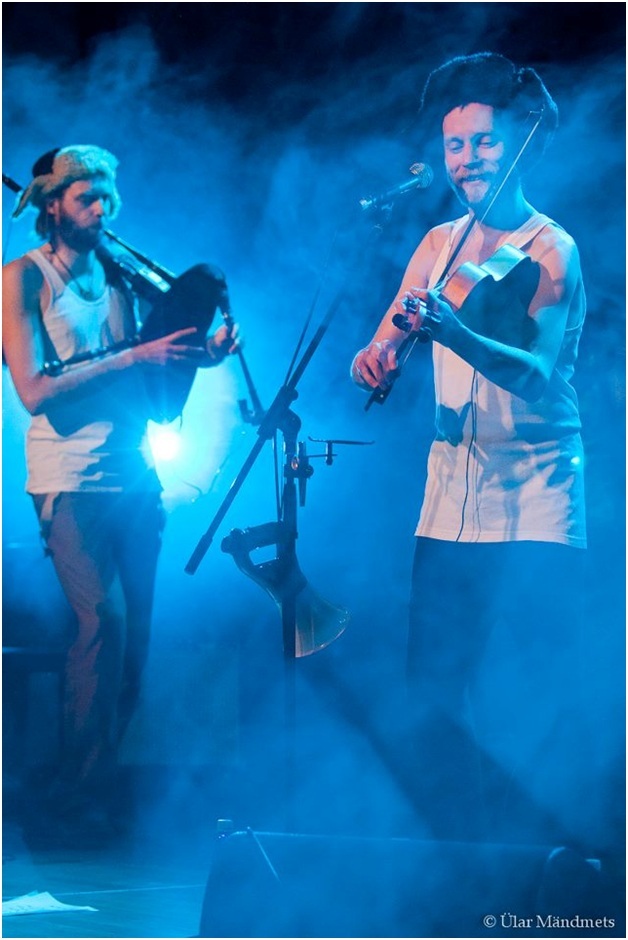 At this point, he asks us if anyone in the audience speaks Russian. The Russophiles cheer loudly. The band is about to break into song when an Indian Uncle in his early-fifties runs wildly onto the stage. He pushes aside a violinist and cheerily grabs hold of the mic and mutters something in Russian.

The band members pick up their instruments and go on to the next song. Meanwhile, Uncleji raises his hands in a typical uncle-at-bhanjay-ki-shaadi fashion and proceeds to dance for a good ten minutes, strutting up and down the stage. The band is loving the impromptu dance show, the organizers are thoroughly confused, and the audience are in hysterics. I, as mentioned earlier, am in tears. Who would have thought that shaadi-uncle-dance goes surprisingly well with Russo-disco-folk music?

Alexey laughs and says this reaction is common in their shows. They themselves break into a synchronized dance routines very often mid-song (enacting the lives of sailors or pancake makers). And have no doubt, they are excellent musicians, playing flawlessly despite the dance routines and instruments that “misbehave because they are used to the cold.”

Alexey proceeds to a deeply philosophical statement: “A passionate blues musician once said if your instrument is not in tune – tune it.” And so bagpipes, violins, guitars, spoons, weird 12-stringed table-like instruments, tasseled party trumpets, loudspeakers, are tuned and played with much vivacity. Violins are plucked, stories are told, memories are made.

The aftermath of my evening with Otava Yo – I’m reverberating with joy. To Russia with love!

All photo credits: Otava yo