Have you ever been slapped by your parents as a child? 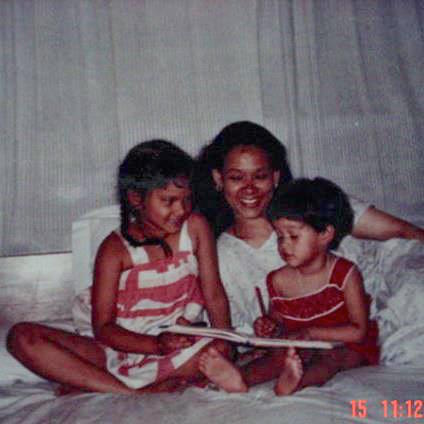 My parents were fairly anti-spanking. In my entire life, I’ve been slapped a total of seven times, spread over three incidents. This is a blog post about one of those incidents.

As a child, my academic performance would be classified as “below average”. Not because I was dumb or anything, but because I would prefer to think about way more interesting stuff in class rather than pay attention to what the teacher was saying. As a result of this, I used to go for not one, not TWO but THREE tuitions when I was in school. My earliest recollection of tuition was when I was in the 3rd grade hindi tuitions (which i used to get myself out of by telling the teacher I had stay back for basketball practice in school, so please don’t bother showing up – SEE. not dumb… just not academically inclined)

There were quite a few of us in class 9 who used to go for maths tuition and then head to science tuition together. One day, I wanted to bunk science tuition so that I could go for extra Hindi tuition coz I had a test the next day and my hindi tuition teacher was kind of awesome coz she used to use English to make me understand Hindi and for once in my life I wasn’t sucking at it. So I told the rest of the girls to carry on to Science tuition and i would just catch up with whatever was taught in class that day later and off I went to Hindi Tuition.

Unfortunately for me, the girls decided they needed a well deserved break from science tuition as well and just didn’t end up going.  The science teacher was friends with the maths tuition teacher and she called and complained about how no one showed up for class that day. The maths teacher was like WTF and called the other girls to ask for an explanation and the others decided it would be in their best interest TO BLAME IT ON ME by saying “Kirin bunked first so we decided to not go so that she wouldn’t miss out on what was being taught that day in class”

Upon further questioning, the girls just told the Maths tuition teacher that they ASSUMED I had bunked so that i could GO PLAY BASKETBALL. Mind you, the basketball court at the time was under renovation. It was being changed from a cement court to a tarmac one.

I return home at 9pm, which is usually the time I got back from my day of work and play BUT TODAY I WAS ONLY WORKING COZ THE COURT WAS UNDER CONSTRUCTION, and I’m in my room … secretly eating chips and reading a book when I hear the home phone ring (remember landlines? from the time everybody DIDN’T have a cell phone?). My mom picks up and 30 seconds later there’s a frantic knocking on my door.

She then puts down the phone and calmly goes “Why did you make four other kids miss out on academically better themelves TO GO AND PLAY BALL???”

By this time, the shock had sort of worn out and I fully lost the plot and became hysterical with rage. I was like “I can’t BELIEVE you would just take that maths teacher’s word for it without CROSS CHECKING WITH ME FIRST. Why don’t you call the hindi tuition teacher and ask her where i was between 5-9 because I sure as HELL wasn’t playing ball on a half renovated basketball court… BY MY SELF.”

My mom was mortified. She immediately apologized. But that cow of a maths teacher never did. I should have stopped going for tuitions to her, but ultimately, i got my revenge by bringing down her total average by scoring 55 in the boards and being the lowest scorer in the history of all the students she had ever had.