Before the internet ruined my life..

When i was about 11, my mother was posted to Ghaziabad as the Vice Chairperson of the Ghaziabad Development Authority. This was a prestigious position and it came with  MASSIVE responsibilities and a MASSIVE house (26 rooms – I COUNTED – out of which possibly 5 were in use ) and a lawn which was about three acres with a hill in the middle of it. 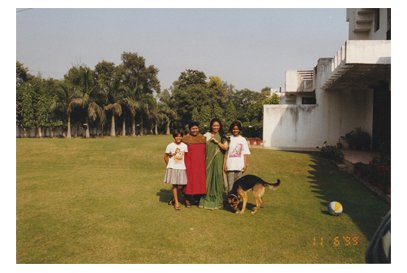 The downsides of this amazing position was that I was not allowed anywhere outside the premises of the VC’s residence without a police escort. Need to sneak off and buy some chips?No problem, just make sure you’re being tailed by someone. Going for hindi and maths tuition a 10 minute was away? No issue, get dropped and picked up in a car with a driver and security person.

This was because my mom was known for being a straight officer who wouldn’t accept bribes. Every day, she would have to go through pitches for land made by different people/ organizations for a plot/ plots of land, and she would have to decide to whom it would go. She would always choose the ones which made the most sense and which was most beneficial for the City as a whole. Ghaziabad, on the other hand, was notorious for using underhanded tactics to get what they wanted (in this case land). My mother lived in perpetual fear of my being kidnapped and held for ransom.

THIS effectively meant that I didn’t get to go out and make friends with the neighborhood kids coz I was so EMBARRASSED that i needed to be monitored all the time (There’s kids for ya – self obsessed lil brats) Come to think of it,  it didn’t turn out to be that bad really. I am of the opinion that my time spent in Ghaziabad is solely responsible for me enjoying my own company so damn much and much rather preferring it over the company of OTHER humans.

Seeing as to how this was the age BEFORE cell phones and Computers – What did an 11 year old do to keep herself pre occupied you ask?

1. I would read. I LOVED the “library period” in school. I would make it a point to choose the fattest books (so that they would last a week) and was granted an earlier than usual access to the “senior kids” section of the library. Of course, the Librarian would screen the books I would borrow, but my imagination brought to life the words on paper. 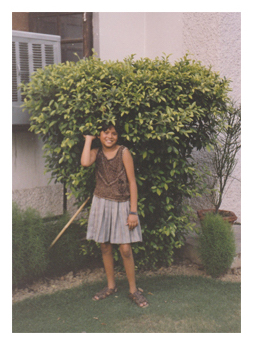 Me and my imagination pretending i have a leaf afro.

2. I would play hide and seek with my dogs – Alex and Teela – The scenarios would be different – a convict wrongfully accused of a crime, breaking out of prison and running for his life while the dogs are let loose to catch him, a princess (like princess Jasmine from Aladin) trying to get away from the evil person who overthrew her father and now wanted to force her to marry him to seal his future as the prince of her country – The big Fat books helped feed my imagination for these games of hide and seek. We had a massive amount of space to work with, and I would trick them by hiding right UNDER their noses like climbing a tree or clambering up on to my mum’s ambassador and lying flat on the roof (ok… may not UNDER – maybe over their noses) The dogs would get extra whiney if my scent got strong or they thought they were getting close to finding me – No other game of hide and seek ever came CLOSE to being as awesome as the ones i had with the dogs as the den. (pro tip – if you play with dogs, you will never have to be the den) and THEY LOVE BEING THE DEN.

one of my absolute FAVORITE memories of Ghaziabad is this ONE TIME… I think I was feeling  EXTRA SOCIAL that day and playing fantasy hide and seek with the dogs just wasn’t cutting it.. Mum was in Office, so i marched down to the camp office (the annexe connected to the main house where mum sometimes worked out of) and ordered everyone to come and play a game of cricket with me, and the best fielders in Delhi NCR – Alex and Teela the german shepherds.

Forty minute later, Madam VC comes home to find the Camp office completely deserted with the phone ringing and no one to answer it. At the same time, she hears a cheer go up in the distance and she decides to investigate… only to see the entire domestic staff deeply engrossed in a game of cricket with her 11 year old daughter calling the shots. Some of the kind folks who were taking part in the game happened to see her immediately resumed being adults again and scurried back into the office, while mum looked on with a small smile on her face and a twinkle in her eye.

They all LOVED that evening…. as did I – they said it reminded of them playing as kids themselves. <3

I had until recently completely forgotten about my time spent in Ghaziabad. Though I was at the time super annoyed with my parents for uprooting me and depositing me in a giant prison (I was a dramatic child) I’m really happy it happened. My time in Ghaziabad made me learn how to LOVE my own company. It provided the perfect setting for imagination to run WILD. Five trees planted close together became my “forest”, The deserted conference room turned into an imaginary press conference for the world’s youngest basketball player. The GIANT dining room with the furniture under sheets became MRS Haversham’s wedding table, the bathtub filled with ankle deep water because my “swamp” the list goes on and on and onnnnnn.  Now, if I get bored, I ITCH for the internet or the distraction that is my phone or laptop.

If I had to repeat my childhood in ghaziabad again, I wouldn’t change a thing.