After the 12th class board exams, I didn’t think I would ever feel the nausea that plagued me before every exam, but on the morning of the 8th of May, it was back. I don’t think it had much to do with the fact that I was taking funkanatomy to a whole NEW city for a festival. IT DEFINITELY had a LOT to do with the fact that I have had incredibly SHIT luck while travelling.

How can I forget the time when I DELETED June and July from the calendar and booked my tickets TWO WHOLE MONTHS LATER than when I intended to …OR the time when I missed my flight by reading the arrival time on my ticket as the departure time and being told at the check in counter that my flight left TWO hours ago :’D

BUS, train, or PLANE – the only thing I haven’t missed is the BOAT.

It all started when I went to the UK for my post graduate year. Now I hate people who move to a new country and then do nothing but complain about being in that country (especially if going to the said country was a conscious decision made on their part) I ABSOLUTELY LOVED THE people and I think the experience of staying on my own in a different country taught me a lot about myself and made me a more well -rounded person, sensitive to differing cultures and points of view… but MAN was I NOT a fan of the infrastructure of the country. ESPECIALLY when it came to Public transport in smaller towns like COVENTRY (where my university was supposedly located)

Coventry is a small town located somewhere between Birmingham and London and the University I went to was located about 20 minutes from the city centre (by bus) the closest train station was at the city centre OR in a place called Leamington Spa – which was another 30 minutes further north from the college campus (where I used to live). Though I loved the fact that I lived in the English country side about 90% of the time, this love turned to HATE if I ever had to travel to London (which UNFORTUNATELY happened to be quite frequently)

We may bitch and moan about how annoying auto and cycle rikshaws are on the roads of New Delhi, but when the only alternative for cheap(ish) travel are TWO unreliable bus services which make you miss the train you booked a month ago (life on a student budget)  by two minutes after you waited for the bus to show up at a cold isolated bus stop for an hour and a half… you tend to think of them as carriages pulled by white unicorns and being steered by prince charming.

Now the next bit I put down to the mere fact of being stubborn (Over my DEAD BODY would I let those pounds I spent on two way train fare AND bus fair and Standing in the freezing cold for 90 minutes go to waste!!!) I was hoping to GOD the ticket collector of the train leaving 15 minutes later would be a lovely person. My plan was to get on the next train and simply play dumb when the conductor told me the ticket I had was for another train (I thought it was a fool proof plan since the train was of the same company as the previous one) – the plan didn’t work. “The conductor was like homie this ain’t yo train. Buy ticket on the spot please” (which would have cost me 52 pounds and I think I had about 57 pounds in my bank account) but thankfully god was on my side and the network for the card machine was down. Also, there was a Nice man sitting opposite me who must’ve seen the miserable look on my face who told me to get off with him at the station before last as there were no turnstiles which would prevent me from exiting the station without paying those 50 pounds! (thank the lord for strangers who hate giant corporations)

After that ridiculous experience with the train, I thought I would give the bus a try. I decided to buy myself a round ticket to London and back which ended up costing me about 6 pounds in total. AMAZING RIGHT???  WRONG. Getting to London was a cinch since the pick-up point for students was a bus stop I could WALK to. I think the fact that I got to London alright made me a bit complacent and set me up for a massive fall in terms of my return trip. It ended with me BEGGING the bus driver to let me on the bus as it was pulling out of the station and being refused point blank (though he stopped and argued with me for five minutes and in those five minutes I could have gotten on the damn bus.) YAY!!! Last minute changes in boarding gates and shitty customer care services!

By the time I left the country in November 2010, I think there must’ve been AT LEAST about 2 more instances where this shit kept happening to me and I was beginning to think I was cursed. So OF COURSE I took great pains to be at the airport in time for my flight out of the country. I made it well in time to catch my flight, checked in with no issues and waited for them to announce boarding. I had a stop over in Amsterdam for half an hour after which I would be on my way home sweet home!

Here’s the thing. They never did announce boarding. The flight was delayed. So I literally ran to the airline counter and was one of the few people to re routed and be leaving the country that day on a flight that was boarding in another 20 minutes.. BUT FIRST. I had to go through security check AGAIN. This time, it wasn’t so smooth.

My phone decided to play a little game of hide and seek. Even though I clearly remembered putting the phone in my jacket pocket, It was no longer there once the jacket made it to the other side of the xray machine. I for the LIFE of me did not know why on earth anyone would want to steal a shitty sony ericsson, but I recalled the security check guy refolding my jacket before sending it through the machine. So I stood my ground and asked them to check their security cameras. I even asked them to call my phone but none of them had cell phones on them and they needed to get an external line to call my number. After 15 minutes of fruitless searching, the security check dude was like .. you have to leave. It’s last call an they’re waiting for you. JUST as I turned to leave, one of the guards finds my phone UNDERNEATH THE XRAY MACHINE.

My euphoria about getting my phone back was short lived as I realized I had to RUN to the boarding gate which OF COURSE had to be the one FURTHEST from me. Running has never been high on my priority list. I am simply NOT built for it. But it was either that OR I missed my flight, be forced to stay in the country ILLEGALLY (since my visa ran out in two days) OR shell out more money than I had in my bank account for a new ticket and go through the security check nightmare ALL OVER AGAIN. So I ran. I ran like Simran ran to Raj in the end scene of DDLJ. Only add about two cabin bags, each weighing about 12 kilos on either arm.

It was not a pretty sight.

I managed to make it JUST in time to catch my flight. I had to run out on to the tarmac, climb the stairbus thingy, ask the airhostess through wheezy breathes whether the flight was heading to Frankfurt. Upon confirmation, I entered the cabin only to be at the receiving end of a MINIMUM of 40 accusing stares which all seemed to say “FIGURES IT WOULD BE AN INDIAN WHO WOULD PREVENT US FROM DEPARTING ON TIME”.  I then proceeded to get a fever on the flight to Frankfurt which stayed with me for about 2 weeks after I returned to India.

(CLEARLY, one blog post is not enough for me to fit in ALL of my misadventures, so I think I shall leave you with an accurate mental image of me running to catch my flight to Frankfurt.) 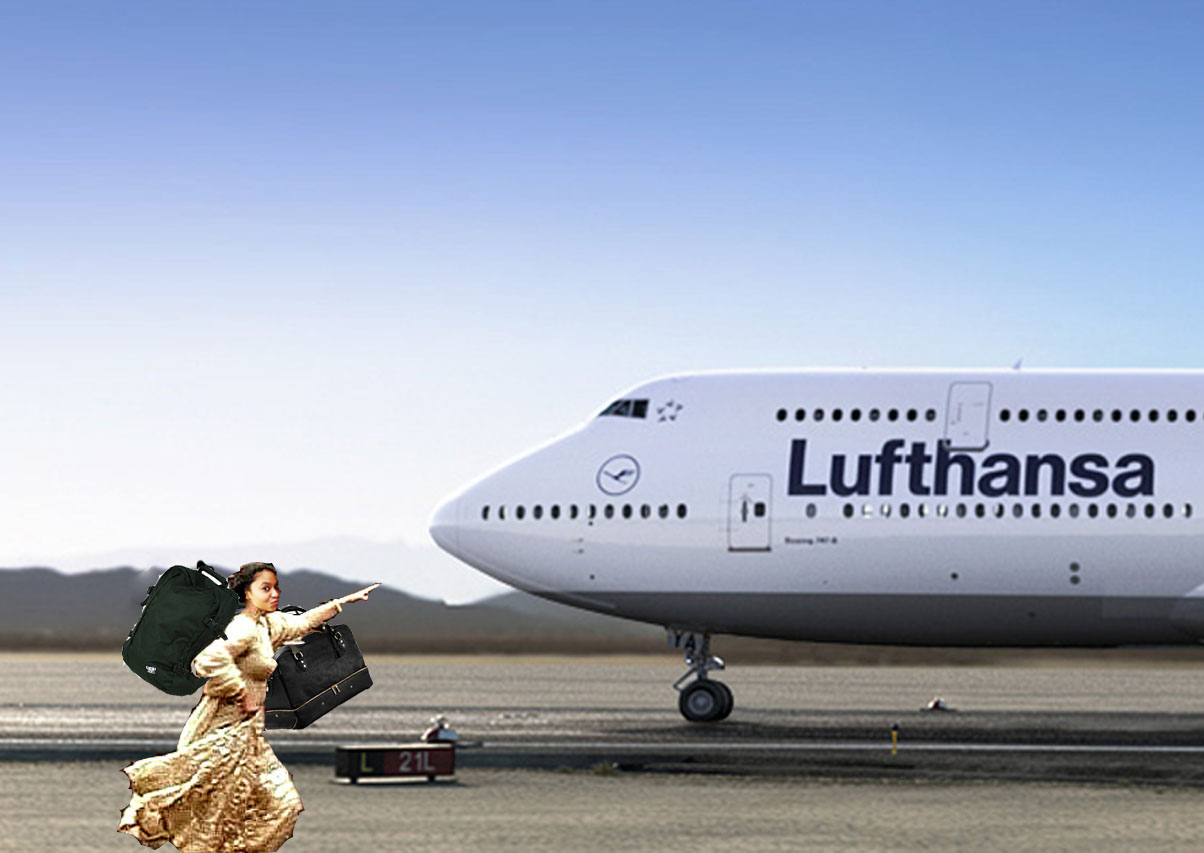